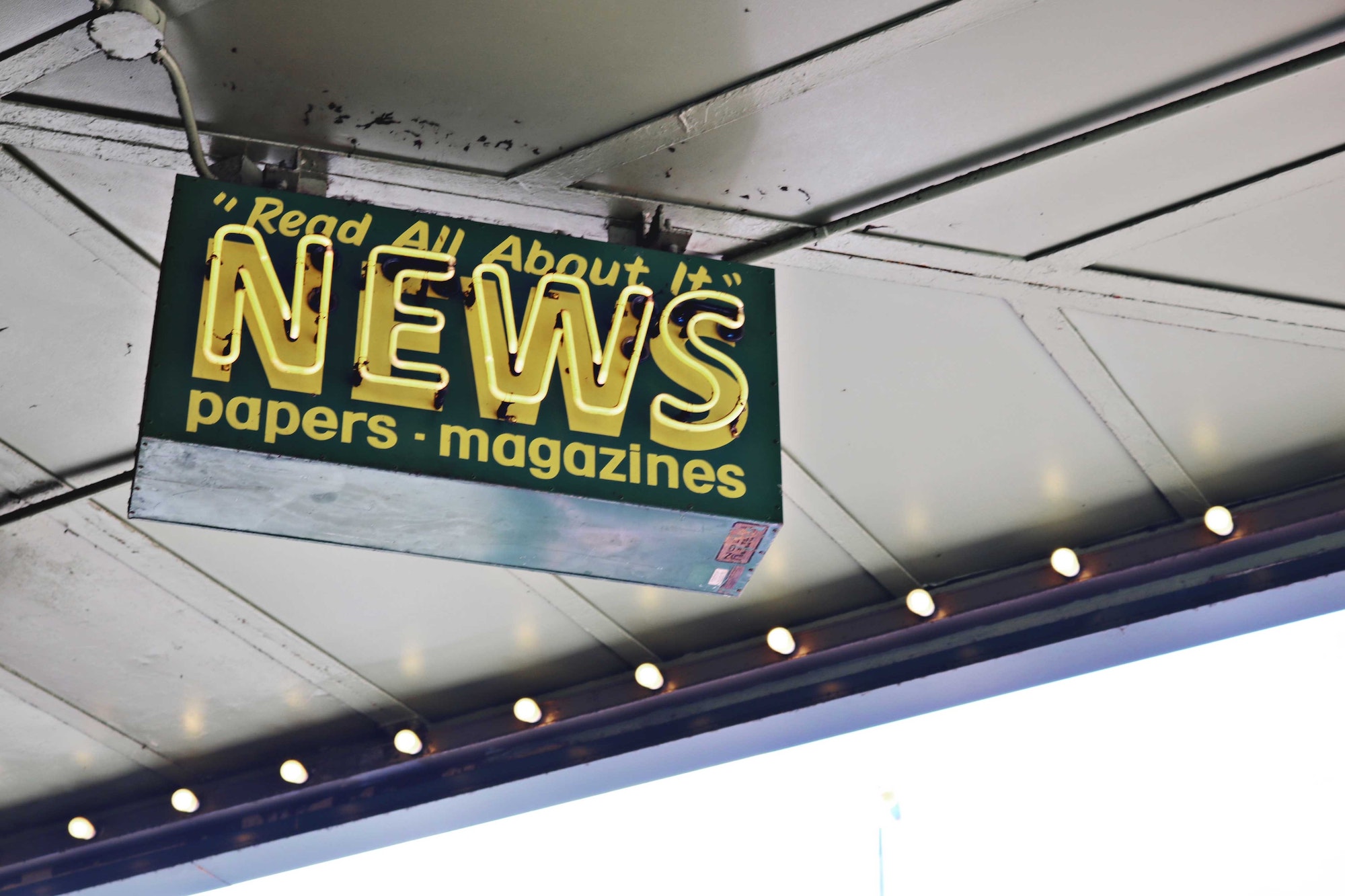 Journalism Has Been “Dead” for Decades. So Why are Media Workers Still Optimistic?

“Media is just a word that has come to mean bad journalism.”

You would be forgiven for thinking the above quote was recent, some columnist in some fancy back-office pontificating about the perceived good old days and the horrors of the here and now.

In fact, those words were put into the world by Graham Greene, a British novelist who would probably despise the phrase “Twitter discourse” and who died more than 30 years ago. Collectively, we’ve been writing this industry’s obituary for as long as it has been alive.

Case in point, Google the phrase “death of journalism” and you get such sparkling positivity as:

“The bonfire of the journalistic vanities has formed part of the lurid background to a decade of revolt,” Martin Gurri writes for Discourse Magazine.

In the Tribune: “A handful of reporters, probably those you follow on social media, have the time and luxury to produce work in the public interest while many of us, not for want of ambition or ideas, spend our time pumping out rubbish in the knowledge that we can be spiked at a moment’s notice.”

And, Jeffrey Dvorkin writes in PBS, “Journalism is (once again) in crisis. This time, the sky really does seem to be falling.”

The number of American newsroom workers dropped 26 percent between 2008 and 2020, according to the Pew Research Center. In Canada, media critique site JSource found that the first year of the pandemic resulted in 1,269 permanent job losses. One of media’s cherished independent feminist magazines, Bitch, shut down in April, just as Buzzfeed laid off much of its award-winning newsroom — not long after they acquired and then shuttered HuffPo Canada.

In the last decade, more and more outlets went digital-first or digital only. We’ve grown accustomed to it because it’s cyclical. But does a weekly crisis of conscience have to come with this whole journalism thing? Maybe. Or, at the risk of sounding toxically positive, maybe not.

Stuck in the middle

Dev Ramsawakh is a multi-disciplinary storyteller and freelancer. They’re conflicted when it comes to the publishing industry’s woes.

“It’s this very weird place for me where I feel both optimistic and pessimistic,” they said. They say assumptions of the health of the industry are rooted in social media content.

For many early-career freelancers, it’s not just the losses of publications that add to the pessimism. Freelance journalist and editor Rebecca Dingwell calls Bitch closing “emotionally tough” – but also points to the smaller-scale opportunities going by the wayside.

She says working in media feels increasingly difficult as the little footholds she built in newsrooms are no longer there.

“A lot of those places don’t exist, at least at the capacity that they once did,” she said. “And a lot of those connections I had are people who may no longer be in media at all.”

Dingwell said her feelings are similar to the ones held by her instructors when she was in journalism school. Like many, she hadn’t always felt this way. Their feelings, which she says are now hard to resist, were “really pessimistic.”

“How is it helpful just telling people, ‘Don’t go into journalism,’ if that’s what you want to do? But today, now that I’m almost 30, I feel almost like a sort of grizzled, pessimistic person myself.”

A dash of optimism

Kai Van Ginkel is another freelancer who counts themselves among the generally pessimistic crowd, though they do also consider their feelings towards the industry cyclical.

“Part of that pessimism is caused by some of the more sensationalist reporting I see on TV (particularly Fox News), and some of it comes from seeing things be misrepresented and blown out of proportion.”

Van Ginkel says this pessimism seeps into their writing as well, especially when they see local stories that haven’t been given the proper attention.

It’s hard not to feel like we reap what we sow. A popular trend in the media is to hire people in precarious positions, give them a glimmer of stability, and then remove their jobs.

We’ve seen people leave media for Netflix and then get dismissed from that post six months later. We see newsrooms rush to ask reporters not to publicly express their opinions after Roe v. Wade is repealed instead of providing support to their employees who may be affected by the decision.

Again and again the folks on top of the masthead prove themselves untrustworthy. I liked a Twitter thread recently that called this “end-stage objectivity.” We see this disconnect in the business models followed by large newsrooms.

Media has consistently followed big tech’s lead (see CNN+ for a glaring example), then scurry, grasping at straws when billion-dollar tech giants pull out the rug from under them. Those in charge of entire verticals, let alone the dollars and cents, do not understand how media works. Does anyone? And so, we continue to find ourselves disrupted, removed.

Creating something of our own

For Ramsawakh, there’s optimism. The opportunities becoming more available lately, like starting a website or self publishing your work, make it easier to get a foothold. Independent and small media brands are the lens through which many, including Dev, see a way forward.

“There are a lot of times where I just don’t feel the editorial skill is at the same level [at mainstream publications] as I’ve had with these independent publications,” including Xtra, Bitch, and The Establishment, she said.

Surprisingly, for some, social media sites like Twitter are a core way forward. That’s true for Van Ginkel.

“Surprisingly what brings me joy in reporting is Twitter (which can also bring despair, admittedly) as [people posting there] will often bring stories to my attention I might otherwise have missed if I stuck to just local news or the bigger names.”

Outlets with a strong social ethos, like The 19th  and The Marshall Project, along with newer Atlantic Canadian publications – like the Newfoundland Independent – are a hit with Dingwell.

For her, they’re a strong antidote to coverage that misses the mark. And a departure from coverage like that written recently by the Canadian Press – a newswire –  that led with a headline highlighting a murder victim’s alcohol consumption instead of the fact that a pair of Metis men had been gunned down.

It was a misstep so egregious that IndigiNews – a Canadian Indigenous-led newsroom — demanded a retraction, saying in an open letter that those that picked up the article had “…endorsed white supremacy, catered to white fragility, and co-signed our genocide.”

“I read that [kind of work],” says Dingwell, “and I’m like, oh god, what are we? What are we doing? Like, as journalists, as writers, have we learned nothing? But then I see other writers and other publications and I’m like, no we have made progress. It’s just that not all the problems have been solved.”

It would be easy to say what we’ve learned is that everything’s fucked. Time to pack our bags, go home, shift into blogging or public relations and be done with this industry. And yet, there is hope. Dogged, tiny, abstract, hidden hope.

What we do know is that the media revolution, to quote Gil Scott-Heron, “will not be televised.” We know this because the “both sides-ing” of long-held media executives and outdated newsroom ethical codes got us here in the first place.

The future is smaller, independent, nimble. It’s in finding newsroom leaders who understand how to run a business and run a newsroom; Finding joy where we can, commiserating and connecting; Rejecting parachute journalism, rejecting sites with taglines about darkness then sequester needed content behind a paywall.

The future of media is about engaging with the media we want to see in the world. Writing the media’s obituary over and over isn’t going to get us any closer to a new, sought-after  reality. And still, I continue to believe this change is possible.

Because if there isn’t hope then why exactly are we all doing this? And what are we signaling to our audiences?